Currently 356 hours per year, 30 hours a month, 7 hours a week – all different.  None of this is syndicated – it is all specific to the outlets described below.

There will also be an addition to the portfolio shortly for an Atlanta based station.

I hope that you are able to enjoy some of the product and thanks for your support and for listening.  Thanks also to the artists as without them this would be impossible.

This show is live from the Passion studios in Bristol led by Rozaya and Beki with me chipping in from time to time, though I supply a lot, but not all of the music – especially the new independent. The final selections are usually made by the girls. There is a leaning towards independent artists and also to local artists especially those that have graced the Soul Freedom Live stage, and often they guest in the studio.  From time to time we do depart and play tunes from our expansive collections from the 60’s onwards

Probably the most expansive show we do

Longstanding twice monthly show recorded by me at home so it doesn’t go out live. Predominantly new independent soul, and really brand new at the point of recording the show, though sometimes it may go out 2 or 3 weeks later so when aired they often are not ‘crisp biscuit’ but pretty new. Sometimes I depart from this and play other stuff and as said above this show is a little more expansive and eclectic, including not necessarily the straight ahead music that goes down in the UK best. More where my heads at stuff than the others perhaps.

Previously I used to paste this show together record the wordy bits and cut this in. Could put a show together is way less than real time… However now I record the show in real time, the talking bits added as we go, no second takes or anything. Broadly just sit by my laptop and piece together the show as we go, sometimes I will do from vinyl or cd as the show dictates. Doing it ‘live’ in this way gives it a much better ‘feel’ I think and better flow and I am much happier with the result.

From Commercial Soul through to new Independent Soul.  This is a new Community Radio Station based in Cheddar Somerset and airs locolly on 104.4FM

This show is live from the Cheddar Studios every Monday – features a lot of recent years independent soul accompanied by Soul Classics, am not afraid to play old Soul so long as its good. What surprises me often, as the show is done pretty much on the fly on the spot, is how well the new and the old mix together dispelling any argument that todays music is inferior – it stands up

These are personal licensed podcasts prepared by me as continuous mixes and available for download as such via podomatic or itunes.   These are done randomly as time allows and are normally an hour in length or thereabouts.  Usually features new Independent Soul Music.

SFL ON BASE, STEPHEN C CAMPBELL

COMMUNITY AND FREEDOM THROUGH MUSIC 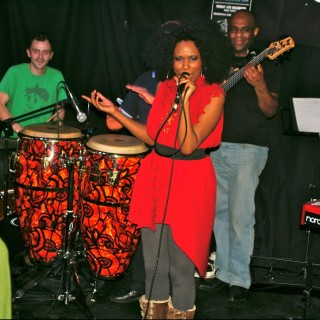 Soul Freedom Live is an offshoot of ventures run by Mike Ashley (Life & Soul Promotions, Indie Soul Mixer, Soul Freedom(DJ/RADIO), singer song-writer, Rozaya Hopkins and visual artist Beki Wills. SFL was launched as a vehicle to promote new and upcoming Independent Soul Artists but with some added variations. Beki Wills was placed in charge of Art and Design, internet and promotion and Rozaya Hopkins, a singer/songwriter, was to use her band 'The Thorns' as the ‘house’ band'. She was also to become our main resident performer, host and artist liaison for the local artists. Together we are SFL and between us we carry out all the other functions to make it work! which are numerous.

There was an error retrieving images from Instagram. An attempt will be remade in a few minutes.

WE ARE SOUL FREEDOM LIVE UK

WE ARE SOUL FREEDOM LIVE UK

'For the soul, made with LOVE'

I am The Thouroughly Annoying Blonde freakish gig going bloke and music obssesive from Bristol , Ready to ruin the over the counter culture with whatever I like!

Enjoy and live life to the fullest!

A small voice in the poetry wilderness

get on the sofa

finding beauty in the flaws...

The Art and Craft of Blogging

The latest news on WordPress.com and the WordPress community.

'For the soul, made with LOVE'

I am The Thouroughly Annoying Blonde freakish gig going bloke and music obssesive from Bristol , Ready to ruin the over the counter culture with whatever I like!

Enjoy and live life to the fullest!

A small voice in the poetry wilderness

get on the sofa

finding beauty in the flaws...

The Art and Craft of Blogging

The latest news on WordPress.com and the WordPress community.